'Initium' was written after 'Ties That Bind.' It is Jeremy's back story.
I felt my readers might need to know his history to better understand his wickedness!

'I Had Him' is a stand alone novel but opens the door for 'Dayne's Demon', and 'Breaking Stone.'

"A Tsunami of a book! A detailed look at Pack Culture and its rules. It is a tale enriched with memories, longing, love, betrayal and families (old and new). Trust is tested, loyalty is demanded and family is hard-earned. The characters are vivid and distinct and each one plays an important role. While there ARE a couple of cliffhangers (detest immensely), I am thoroughly impressed in the obvious talent the author has! My debit card is lacking therefore I am forced to painfully wait to purchase the rest of the series (something I normally hate)! Avid fans of Shifter Romance would LOVE this!" 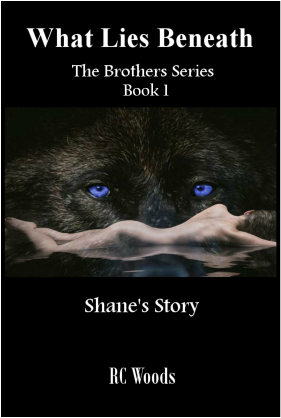 Shane's Story
A wolf running from his violent past, Shane stumbles upon the human woman destined to become his mate.
Believing him to be delusional, Elisa is only convinced of his unbelievable story once Shane’s best friend
Jeremy takes matters into his own hands. Overcome by the strong feelings Shane provokes in her,
she soon realizes the far-fetched story he has attempted to convince her of is the truth.
After accepting him for what he is, Elisa is brutally attacked by a rogue wolf and
thrust into a life she isn’t prepared for. With Shane and Jeremy as her advocates, she learns their way of life
and how to come to grips with the changes to her existence.
Together, they become the new pack that Shane has dreamed about and the family he has longed for.
Confronted by the violent past, the three are plunged into a situation over which they have no control.
When Shane finds he has been deceived by one of  his own, he must decide the value of honesty versus loyalty.
Purchase "Wrong Side of Heaven" Book 2 $0.99

"This book was amazing! It was a roller coaster all the way through, keeping my interest from start to finish! I read it in one night, staying up all night to finish it. I can't wait for the final book to release! This author just keeps getting better! I have definitely became a HUGE fan of RC woods after this one!" 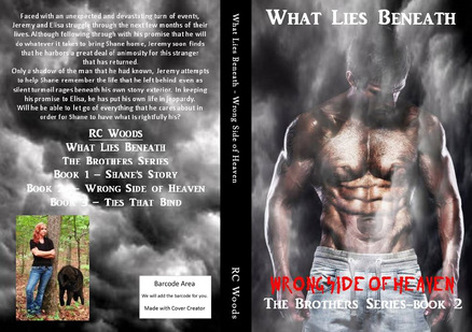 Wrong Side of Heaven
Faced with an unexpected and devastating turn of events, Jeremy and Elisa struggle through the next few
months of their lives. Although following through with his promise that he will do whatever it takes to bring Shane
home, Jeremy soon finds he harbors a great deal of animosity for this stranger who has returned.
Only a shadow of the man he had known, Jeremy attempts to help Shane remember
the life he left behind even as silent turmoil rages beneath his own stony exterior.
In keeping his promise to Elisa, he will put his own life in jeopardy.
Will he be able to let go of everything he cares about in order for Shane to have what is rightfully his?
Purchase "Ties That Bind" Book 3 $0.99

"I can't say enough about this new aspiring author. I was so impressed with the first two books in this series that I was so excited to continue the story that I put down a Nora Roberts book to read "The Final Chapter" as soon as I got it and couldn't put it down. I'm sorry to see this series come to an end. I can usually feel where a story is going and predict how I think it will end but not with "The Final Chapter". RC Woods writing style, plot and character development held my interest and continued to surprise me to the very end. I'm so impressed with all your work. It just keeps getting better. I'm looking forward to your next release. RC Woods you are my new favorite author!" 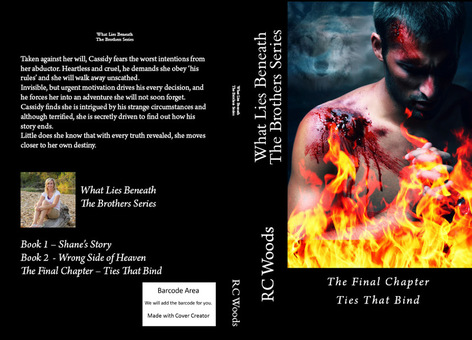 Ties That Bind
Taken against her will, Cassidy fears the worst intentions from her abductor.
Heartless and cruel, he demands she 'obey his rules' and she will walk away unscathed.
Invisible, but urgent motivation drives his every decision, and he forces
her into an adventure she will not soon forget.
Cassidy finds she is intrigued by his strange circumstances
and although terrified, she is secretly driven to find out how his story ends.
Little does she know that with every truth revealed, she moves closer to her own destiny.
Purchase INITIUM $0.99 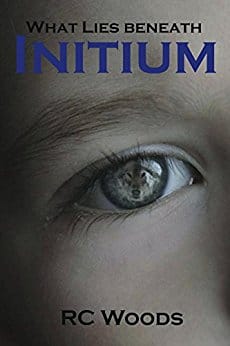 After resorting to desperate measures to escape an abusive situation, a young boy hides away
from the world on the cold streets of Toronto. Surviving beneath the trash and debris in a cluttered alleyway, he
remains undetected until a passerby discovers his true identity.
Jeremy finds an exciting new world existing beyond his bleak beginning
and unlikely future, along with the unexpected friendship of a boy who will
stand with him against any odds.
Yet his new life is anything but perfect.
The suffering of his past influences every step of his journey, limiting
his ability to experience emotion and creating the belief that he
will never feel connected to anyone.
Until her
Purchase "I Had Him" $1.99

"It is rare for me to find a book that I can't put down. This book is a mix of hopefulness, darkness, suspense and thoughtfulness. It's a story of love that goes beyond the norm and the supernatural world of werewolves and humans.
I see a great future for this author."

He was no angel.
Growing up in the Edgewoods pack, I heard the vicious stories. With my own eyes, I witnessed the map of scars covering his body. At one time he had been a ruthless killer, his wolf fierce and unpredictable.
Until I came into his life.
In raising me from an infant, I knew nothing but gentle love and protection from the man I called Dad. No blood tie existed between us, but I could not have loved him more. Our lives were perfect until an overlooked piece of the past threatens to separate us forever.
A daughter’s tale of unconditional love, and the steps a father would take to protect his child at any cost.
During a time in his life when he’d lost everything, the only peace able to save Jeremy’s sanity was his daughter. Raising her from an infant, he experienced the strong protective nature and love that a father has for his child, even though she isn’t really his. With all focus on her wellbeing, he brushes away any probability of finding a mate, all possibility of feeling love again having died with the mother of his child.
And then Tawna Morgan comes into his life. She stirs feelings in Jeremy that he hasn’t felt for years. He dismisses them, determined to remain loyal to a memory. He pushes Tawna away,             refusing to deal with the distraction while guilt eats away at his insides over the betrayal of his heart. With his life in chaos, he must confront his feelings for Tawna while facing the bitter deception of a man he once called brother.
PURCHASE "DAYNE" $1.99

*I voluntarily read a review copy of this book. All opinions stated are solely my own and no one else's*
Daynes Demon was an intriguing read and I really enjoyed it.
Dayne was a complex character - he shares his body with his wolf and a demon. He's cursed and he wants it to die with him but when his path crosses with Alana's; he gets to experience his body, mind and soul awakening. He wants to stay away from her, but can't; he pushes her away but his heart aches and yearns for her.
Will Dayne give into his desires?
My heart broke for Dayne; he comes across rude, abrupt and mean but underneath the tough exterior; he desperately tries to do the right thing by Alana. The author captured Dayne and his demon's pain, sadness and conflicted emotions very powerfully throughout - it was incredibly moving
I liked Alana; she showed no fear towards the demon. Her feelings for Dayne were evident from the beginning- she couldn't hide her emotions but that's what I liked about her. She's stubborn, feisty and determined.
The ending literally bought tears to my eyes - I definitely wasn't expecting the awful events that unfolded.
This is the first book I've read by this author but it definitely won't be my last. This was an amazing read and I wouldn't hesitate to recommend it. 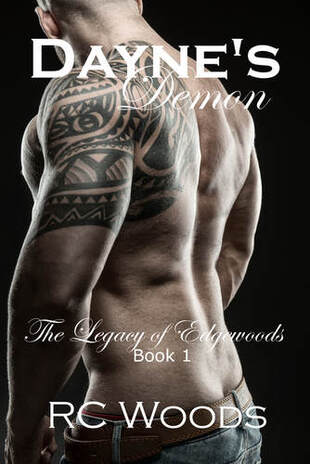 He wasn’t born this way.
On his twenty-fifth birthday, Dayne had been given the Demon, a final and terrifying gift from his father. Created immortal in the demon’s image, he quickly realizes that nothing good can come from his presence in society.
Disappearing into the wilds to live in seclusion, the years pass in the blink of an eye, and Dayne grows accustomed to his solitary existence.
But an encounter with a young girl will open his eyes to what he has avoided for nearly two hundred years…and wake his ancient heart to the possibility of love.
PURCHASE "STONE" $0.99
"OMG I just loved this story, it was so darn intense. I wondered what would happen to Stone, and did I find out.
Two people hated each other until their wolves had other ideas and watch out for those wolves. lol
Back story Stone was attacked by the demon that almost ripped his soul apart, instead it made him hard and not trusting.
Alana, just wanted to fight, protect, kick some booty, and low and behold here comes Stone. Back from his sabbatical comes face to face with Alana, literally.
I loved to see the how they would evolve." 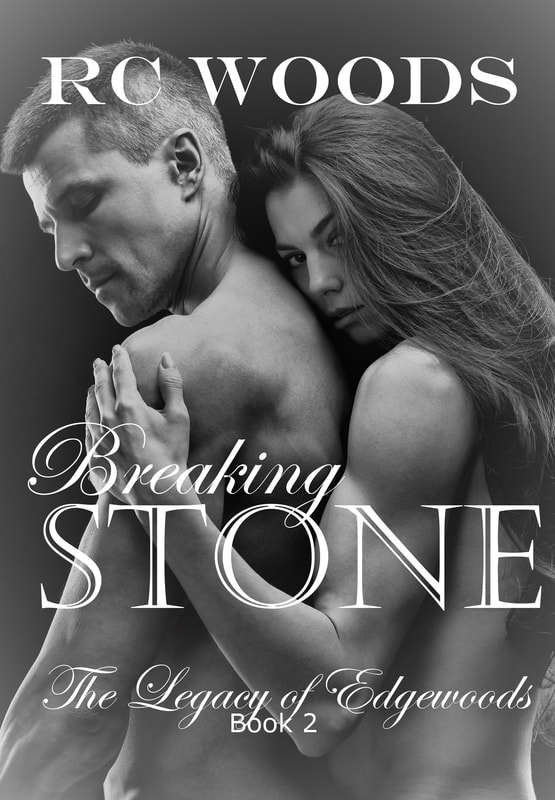 Although faced with challenging obstacles along the way, Alana Mathews has nonetheless come out at the top of her profession. Promoted to Lieutenant status within the Rogue Elimination Department, she is anxious to advance as far as possible in her career.
The return of her greatest nemesis, a.k.a Lieutenant Grayson Stone threatens to push Alana's tolerance to the limit. Not only is he arrogant and full of himself, but he's also against females participating in Departmental executed outside missions, claiming the weaker sex are too emotional and unstable to withstand extreme conditions in the field.
Both unable to let go of the past, their history sets the tone for future encounters and hostility continues to flourish between them. Shocked and appalled when they discover their wolves have other ideas, will they allow their animosity for one another to dominate the hand fate has dealt.